By Bill Schultz - October 13, 2015
Many of our fishing friends turn to hunting in the fall, but don't put that kayak away just yet. There are some great spots in Wisconsin to chase smallies throughout the fall. Let me give you some suggestions. Then I'll give you some kayak equipment tips, along with a great presentation that will add to your success to catch and "ideally" release those smallies. 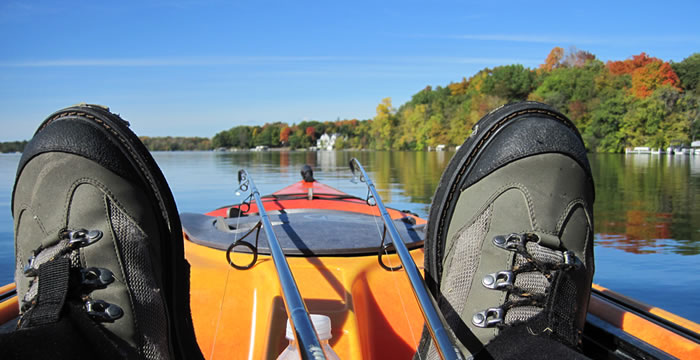 Door County, rated one of the top smallmouth bass destinations in the country, offers over 300 miles of shoreline with Green Bay on the west and Lake Michigan on the east. Fall is a great time, as the smallies are putting on the feed bag preparing for winter. From south of Sturgeon Bay to Washington Island, there are dozens of great sites to launch your kayaks.

The Wisconsin River from the headwaters north of Eagle River all the way to the Mississippi can be outstanding. It's hard to ID any particular location because there are so many. At this time of year the water levels are usually fairly low, so launching and fishing up and down river from your launch point is easy to do. But, bring a second vehicle or coordinate being dropped for an action packed day or two trip.

In southwest Wisconsin the Grant, Platte and Fever Rivers all offer good smallie action, although the Fever can have some pretty skinny water at times. In Lafayette and Grant Counties, these rivers wind through fields and pastures with plenty of locations to put in and take out. 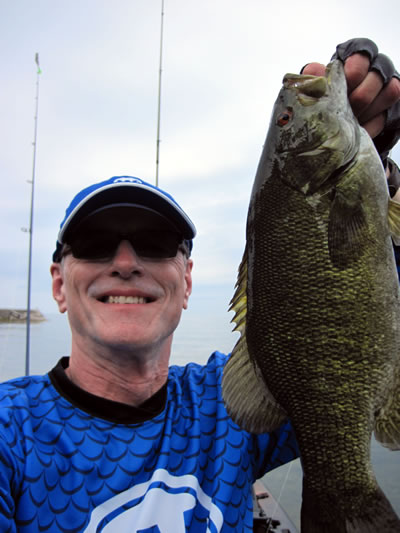 In western Waukesha County, you will find a number of fun lakes that get very little fishing pressure after Labor Day. Beaver Lake, off Hwy. 83 has an outstanding carry-in launch with parking for a dozen or so vehicles. The clear waters hold good numbers of small and largemouth bass. Most are on the smaller size, but it's still a great time. Lac la Belle, with its eastern shore in Oconomowoc is larger, and also holds nice numbers of smallies. If you can find rock on the bottom or rocky shoreline, you're in business. A nice launch is located on Wisconsin Ave. in Oconomowoc. I have to mention Oconomowoc Lake, which might be the best of all. Park and launch at the 20 space lot off Hwy. 16 and make the easy paddle down the river to the lake. There's plenty of rock and like many of the bodies of water I'm highlighting, the water is very clear. Upper and Lower Nemahbin and Nagawicka, all in the Delafield area just north and south of I-94 need to be on the list. There's a great launch at Nagawicka Park off Hwy. 83 and for the Nemahbins, a public launch on the short river between the two lakes. This time of year the bass begin heading shallow, so look for rocky shorelines, rocky and sandy flats.

The Milwaukee River flows from north of West Bend in Washington County, into Ozaukee County and the length of Milwaukee County, before hitting the Milwaukee Harbor. It holds nice numbers of smallies its entire length, offering dozens of spots to launch and fish. There are areas north of Milwaukee County that get almost no pressure, so, if you can get your kayak in you could be in for a nice surprise. And, some nice northern also.

Jumping back to the northeast, the Oconto River from Green Bay to the Stiles Dam is a blast. There are a number of places to launch in Oconto and a few to the north. Just north is the Peshtigo River. From Peshtigo down to Green Bay is outstanding, but with both the Peshtigo and Oconto, you can explore north of where I've noted.

I've had very good smallmouth bass success on all the lakes and rivers I've mentioned, but a key word I use in my seminars is "explore". First, explore the places I've mentioned, but also there are hundreds of additional lakes and rivers in Wisconsin you can explore. At the recent Bassmasters Angler of the Year Tournament in Sturgeon Bay, I was working the Bay Shore Outfitters booth for Wilderness Systems Kayaks. A woman stopped by who I know from my seminars. She was excited to be there and wanted to talk about getting a new kayak. During our conversation she reported that in the few years she's been kayak fishing, she's explored 83 different lakes. What a great time she's having exploring all those lakes!

Some of you may be experience kayak anglers, but for those new to the sport or considering a first kayak, here are some tips. I fish out of Sit-on-Top kayaks because they offer more space for casting and gear, are extremely stable, as well as being so easy to get in and out of. Currently, I'm fishing in both the Wilderness Systems Thresher 155 and 140, along with the Tarpon 160 and 140. If you like to stand while fishing or are a fly fisherman take a look at the Wilderness Systems Ride series, Commander series or the ATAK, recently voted top fishing kayak for 2015, by one top kayak fishing publication. My kayaks are between 14 and 16 feet. I like the longer kayaks because they are faster and track better. A rudder is a must for me. Even a 14 foot kayak, which may seem long, will work on just about all the bodies of water I mentioned. Sometimes anglers will go with shorter kayaks in the 10 to 12 foot range on smaller rivers. In the kayaks I fish from I use Adventure Technology paddles with oversized blades that are 230 or 240 centimeters long. Paddle length is based on the height of the paddler and the width of the kayak, but going with the oversized blade makes moving the larger fishing kayaks easier, especially in moving water, like rivers.

One last tip. For the past 7 years, a great river and lake smallie presentation has been swimming a Kalin's Lunker Grub on a Gopher Tackle Jig (For a more detailed look, check out my August, 2014 article on Lake-Link). My best river color and size has been the 4 inch Blue Pearl Salt and Pepper, while the 4 inch Smoke Salt and Pepper has been my best clear water lake color and size. It's pretty easy, cast as far as you can and retrieve as slow as you can without hitting bottom. You'll be surprised at your success.

I hope this article gives you some new spots to chase smallies and a little information about kayaks and paddles. If you would like any additional information, please email me at [email protected]

Bill Schultz
Bill Schultz lives in New Berlin and Sturgeon Bay, WI, and is a contributing writer for several magazines and web sites. Since catching his first smallmouth bass in 1994, he has caught and released over 24,000. His focus has been on the big waters of Green Bay in and around Sturgeon Bay, along with rivers and streams throughout Wisconsin. Catching and releasing smallies and sharing his recipe for success has become a passion for him. Bill is on the Pro Staffs for St. Croix Rods, Mercury Marine, Yar-Craft Boats, Jackson Kayaks, Bending Branches/Aqua-Bound Paddles, Kalin's, Keitech USA, RAM Mounts, Cedar Lake Sales and Malone Auto Racks/Trailers.
TRENDING DISCUSSIONS
Advertise here