By Jason Mitchell - November 1, 2015
Not all bodies of water offer solid after dark fishing opportunities for walleye but there are so many notable fisheries where we have traditionally caught the majority of fish or sometimes the largest fish long after the witching hour when the sun sinks into the horizon. On many bodies of water, the best walleye fishing happens after dark. From Montana's Fort Peck Reservoir to the Finger Lakes of New York with a long list of fisheries in between these two destinations, the night shift is where it is at for catching walleye through the ice.

I cut my teeth with after dark walleye fishing on the east end of Lake Sakakawea and nearby Lake Audubon, both large impoundments created by the damming of the Missouri River in western North Dakota. Each of these two lakes offered their own personalities despite the close proximity. We often caught eighty percent of our fish on Sakakawea for example during a window that occurred between one and two hours after dark. On nearby Lake Audubon, the fish would often bite sporadically all night long with action that could keep us moving all through the night. I have been on Red Lake and Mille Lacs Lake several times where the best action occurred between midnight and four in the morning. 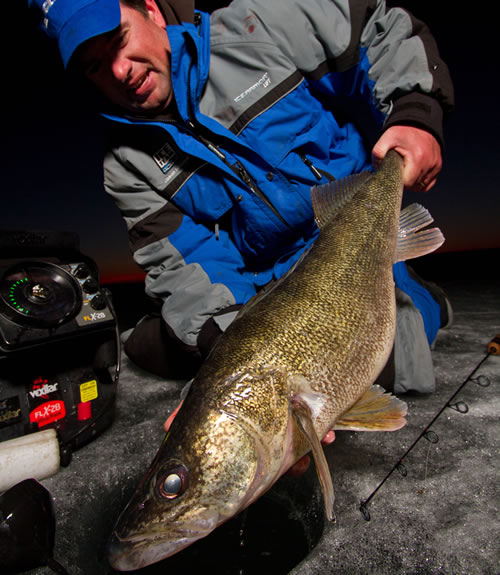 Most fish that get caught during the dark of night often get caught in hard-sided fish houses with rattle reels. I have always loved the possibility of catching a fish while I slept. Rattle reels combined with live bait is a simple and effective presentation that no doubt works but you can dramatically see an uptick in your vampire walleye game with a little bit of hustle.

Tip ups can be an important tool for after dark walleye missions. Think of tip ups as not only a very effective fish catching device that you can use to cover a location but also your walleye radar. By covering a spot with tip ups, you know when and where fish move up on a particular location. Always been a big fan of the classic Beaver Dam design, opting for the heavier twenty or thirty pound Dacron for the primary line as the larger diameter rolls off the spool nicer with less resistance. Below the Dacron, I typically attach a small barrel swivel and a leader of ten-pound fluorocarbon. I have used small trebles and multiple treble quick strike rigs that used multiple hooks with some success but have really started to favor a single kahl style hook as the larger gap seems to keep larger chubs and minnows hooked up longer versus the smaller gaps found on small treble hooks.

Big strong minnows are the ticket where we have often used minnows as long as seven inches, sometimes larger. The challenge with the larger minnows is that you have to keep them in the strike zone. If you anchor the minnow down with too much lead in the form of a rubber core sinker or split shot, the tip up is more apt to trip from the minnow and than you have to use a heavier trip setting. What I like to do is use the bare minimum to keep the minnow near the bottom and pinch off much of the fin on the tail so that the minnow can still swim but doesn't have as much horsepower to swim out of the strike zone. Another thing I like to do is take some electrical tape and wrap some tape around where the line guide is attached to the rod next to the spool so that the minnow can't swim off line by rolling the line guide around the spool. Big minnows can peel off a lot of line without ever tripping the flag by just swimming in a big circle counter to the direction that the line is spooled on the tip up.

Jigging lures has caught a lot of fish for me after dark and can be much more explosive than tip ups with the number of fish you can catch in a very small window of time. While you can jig all night long if you want to, a top strategy is to let the tip ups tell you where and when to jig. When flags start to pop in an area, bounce around and jig open holes. This classic one-two punch combines two complimentary but drastically different styles of presentations and optimizes each.

When it comes to jigging walleyes after dark, the best color I have found bar none is glow in the dark. Since we started using some of the first phosphorescent jigging spoons over twenty five years ago, there is no doubt in my mind that we get bit more when using lures that glow when targeting fish after dark.

A new spoon that really opened my eyes this past season when testing some of the early prototypes is the new Clam Rattling Blade Spoon. This particular spoon is unique because it features a pyrex-glass chamber that amplifies the noise much more than traditional brass. The BBs are stainless steel instead of lead so the BBs retain their circular shape better and offer a louder and more consistent rattle with less effort. I love rattle spoons and rattle baits for after dark walleyes and the glow paint used on the Clam Tackle is some of the best available in commercially made tackle.

For really charging a glow in the dark lure, nothing I have found beats a UV light charger. The glow lasts longer and is much brighter. Another tip for jigging after dark is to work slightly higher than you would during the day. If most of the fish come through from one to two feet off the bottom, don't be afraid to work the water column say four to five feet above. This zone is often the big fish zone particularly after dark.

Bite indicators, hole covers and tip up lights are also great tools for the after dark walleye angler. While tip ups require some patience, don't get complacent. Check baits, clean holes and move tip ups around… stay active with the tip ups until they start to fire. When a school of fish comes through, pick up a jigging rod and go to work. This tip up first, jig rod second component of the strategy seems to make my after dark fishing more successful. Typically, when fish move up on reefs and other structure after dark, they do so to eat. Can't tell you how many times, seemingly one fish would hit every tip up until we eventually caught it… I dare say that because after about the fourth flag, we finally caught a fish that still had the minnows from other tip ups still in its mouth or gullet. We have also been blitzed where every single tip up would get hit in a short amount of time as a school of fish moves through. Flurries best describes the action where you can sit for an hour or two and than the dams break loose where there are fish flopping all over the ice.