By Jason Mitchell - September 29, 2015
The advantage of trolling crankbaits for walleye is twofold. You can cover a lot of water and swipe through large areas and you can also trigger fish that might not respond to some slower and subtler presentations. On so many bodies of water, we see a transition that gains intensity as fall transcends into summer where crankbaits seem to trigger more fish especially if you are looking for big fish.

Crankbaits are not the answer for every situation but trolling hard baits shine whenever the locations get big. Basins are an obviously big locations but so are a lot of the contours and locations that hold fish each fall. The first step I like to do when attempting to dial in a trolling strategy is identify the end zones. That is how much of a field are you working with. How long or how big is the location where there are fish. If the contour basically stays the same for three hundred yards, that is my trolling run. Establishing the end zones is important because that way you can identify exactly what your trolling run is and keep your baits in the zone. 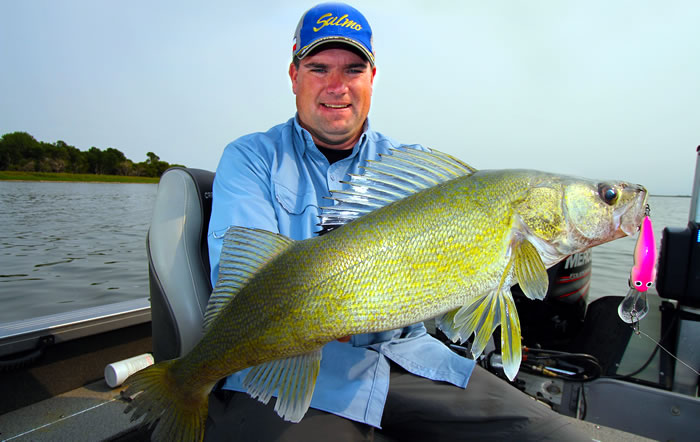 Some anglers approach trolling with a level of randomness where they put on a lot of miles without a strategy. Yes you can catch fish sometimes where you don't expect them and sometimes you just have to spend some time with your electronics and map chip to really figure out what types of locations are attracting fish but once you get that general information as to what types of spots are holding fish, attempt to spend all of your time in those spots. When you get to the end of the good looking water and the contour flattens out or the bottom composition changes to something that hasn't been holding fish, you are at one end zone and you need to turn around and go back up the field until you find the other end zone. Once you figure out the end zones on a location, hustle to keep your lures working properly over that spot.

Trolling locations and big fish locations can be fleeting in the fall and some of that I believe can be attributed to the forage at that time of the year where fish are often pulling out over open water and also targeting larger forage as young of the year bait fish grow up. Come fall, it takes fewer perch or tullibees to make a meal. The reality is that on most healthy ecosystems, fish are not always eating. Sometimes they are full and don't want to eat. Fish that are looking for a meal make you look better than fish that just got done with a meal. With so many fall trolling patterns, there is often power in repetition in that it often takes a few laps up and down the field to find a rhythm. A mistake I have made more times than I care to admit is not giving a location enough time if I know that there are fish around. Unless you get lucky and hit things just right, you often cannot make just one pass and leave. You also cannot die on a spot all day and never change locations either so use your watch to manage your time. Good spots often require an hour, sometimes more. By using the element of time and abiding by parameters marked with time, you can be both strategic and methodical and that equation to the overall strategy might be most important. Late summer and fall trolling patterns often require a certain level of patience because the windows where fish move up and down on locations seems more marked at this time of the year.

Another rule of thumb for catching fall walleyes by trolling crankbaits is that the fish seem to like larger lures in the fall compared to earlier in the year. Unless I am fishing over the tops of weeds behind the boat in shallow water, I am often running larger deep diving lures behind the boat even when fishing in water less than fifteen feet. I cannot tell you how many big fish I have caught by running a larger billed lure that could run as deep as thirty feet and putting that lure out behind the boat on a short amount of line in say ten feet of water. In the fall especially, big fish just seem to love that harder vibration where the lure is moving more water. Here is something else I believe happens when you run a deep diving bait right behind the boat before it plateaus on it's dive curve. The bill seems to run down and the tail runs up where the bait moves through the water in a more vertical position and this posture of the bait seems to move more water and offer a larger target for fish that approach the lure from behind.

With this information on changing the posture of the lure by where the lure is at on its dive curve, you can manipulate this posture over more varied depths with lead core and snap weights. There are a few lures you can use to hit twenty seven feet for example on 150 feet of line but when a lure plateaus on the dive curve, the lure will flatten out and some days the fish want the lure running this way but so often in the fall, the fish really like a the lure to run more tail up and you can often get a lure to look tail up by running that lure on shorter amounts of line with lead core and snap weights. As a general rule of thumb, I feel like I catch more fish in the fall by keeping the lure as close to the boat as possible so that the lure is not reaching the bottom of its dive curve and if I have to go deeper than that, I use lead core and snap weights… literally.

Both lead core and snap weights have advantages. I love how lead core snakes behind the boat and follows contours. I hate how long it takes to let out. I feel like I need more room to use lead core. I like how snap weights can take you down into the strike zone so fast, the set up time in immediate. What I often do in the fall is clip a snap weight onto my lead core just above my leader. Some of the characteristics of lead core get compromised by adding a snap weight but the advantages often outweigh the disadvantages in that set up time is faster and I can keep the lures much closer to the boat.

Taking this lead core snap weight combo system one step further, by using slightly lighter weights on the back rods versus the rods that are on the sides or in front, I can stagger the lures and stack the lures behind the boat in a fairly tight formation. During the fall especially, this little trick can be deadly. Four lures running close together have an entirely different triggering quality that is hard to describe or quantify but it works so well at times especially during the late summer and fall. I speculate that one lure might simply turn a fish or perhaps arouse a fish but they don't turn on the jets and run it down. When the second, third and fourth lures come rumbling by, the fish is somewhat already aroused and gives chase. Sort of like beating a shallow fish over the head with several casts. The other lures are your other casts. Fall big fish patterns so often seem to be either off or on with the windows of activity pretty defined and short. Running lures in a tight formation seems to scratch more fish when the fish are off.

If I had to pick one prime type of spot that produces big fish on natural lakes, it would be a nice run where there is some inside turns over a hard bottom that has a fairly fast break into deep water. While sharp breaks might be everywhere, that harder bottom over deeper water is usually not so common. Rock located in less than twenty feet of water can also hold big fish and those spots are often more abundant. With side scan and down imaging, we can also analyze the shape of the rock as well and round rocks or boulders often hold more big fish than ledge rock or sand over deeper contours. Every lake will have its own characteristics but identifying the right bottom composition is critical. This overall strategy has produced some of the largest walleyes I catch each season and truly offers some of the best fishing each year for big fish.