Fish The Weedline In The Fall

By Bob Jensen - September 23, 2015
The weedline is a great place to find and catch fish all during the open water fishing season. Lots of anglers even work the weedline while ice-fishing. Simply put, there is almost always a fish somewhere along the weedline that is willing to get caught. 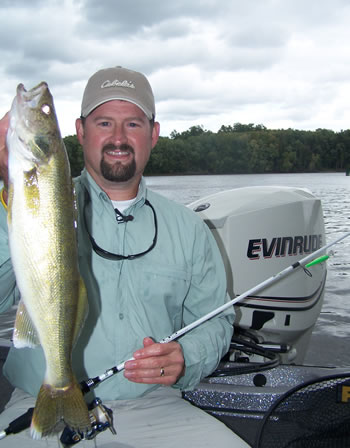 In the autumn months a variety of fish will be in the vicinity of the weedline. You might have a school of crappies suspended just off the edge of the deep weedline, there might be a group of largemouth on a corner of the weedline, and just a little farther down the weedline where the vegetation juts out a bit and forms a point, there could be some walleyes. And it's not unusual to find a bonus musky or northern pike roaming over the tops of the weeds or along the deep edge. Although there may be more fish grouped tighter in different areas, the deep weedline in the fall will often provide a smorgasbord of fishing action.

Lots of techniques will take fish along the weedline in the fall. If you're after walleyes, try the largest Mimic Minnow or Mimic Minnow Shad. Move it aggressively: Lots of hops will trigger the most fish until the water really cools off. Then a redtail chub worked slower on a jig or live-bait rig will produce.

If largemouth bass are the target, tie on 6.5 Hornet and work it parallel to the weedline. Work it a different speeds and with your rod held at different angles to get the bait to run at different levels along the weedline. Sometimes, especially on warm, cloudy days, the bass will be over the tops of the weeds. Throw the bait over the weeds, keep your rod tip high, reel slowly, and hang on. If they bass are there, they'll let you know.

Another outstanding way to catch largemouth bass when they're over or along the weedline is with a spinnerbait. Use one with a big blade. Tip it with plastic, something like an Impulse Paddle Shad or Paddle Minnow. You want some tail action, but not a lot.

Cast the spinnerbait over the tops of the weeds and work it back to the weedline. When you think it's near the deep edge of the weeds, let it fall. Keep your line tight and watch and feel for a tick. The strike won't be hard, but it will be distinct. Reel down and set hard. After a few fish you'll know if they're over the tops or along the edge, and sometimes they'll be in both places.

If it's a calm late afternoon or early evening when you start fishing, and you see fish dimpling the surface near the weedline, move very quietly toward the dimpling and throw a sixteenth ounce Thumper Crappie King jig/plastic. Swim it slowly through the area being dimpled and you'll probably catch some crappies. The dimples are created by crappies sucking bugs off the surface. Since the crappies are feeding on the surface, you'll want to swim your bait just a couple of feet below the surface of the water.

Another crappie killer we've been using a lot the past couple of years is a #4 Hornet. If the crappies are home, they'll hammer this bait aggressively. The weedline can provide lots of fall action. Make sure you're fishing healthy green weeds. Keep moving until you find the fish. When you find them, they'll usually bite. You'll see Mother Nature at her best and you'll have the opportunity to have a good time: What more can you ask for? PHOTO CAPTION: In the autumn months hungry groups of walleyes will work the weedline in search of something to eat. Doug Veldhuizen caught this one on a crankbait.