By Jason Mitchell - August 31, 2015
So much of the information written or said about whitetail hunting originates from big woods hunting. While there are lessons that can be learned or reapplied wherever deer roam, tactics and strategies can change dramatically as the terrain changes. What makes whitetails such remarkable animals is their adaptableness. What I found as I picked up a bow and pursued whitetails is that many of the concepts and information I absorbed as a beginning bow hunter was irrelevant because wide open farm country creates different challenges. There are a few things I wish somebody would have told me when I first started bow hunting Great Plains whitetails.

Further east where the landscape is much more wooded, the population's densities of deer are much higher. Deer live in a much smaller area and there are more deer per square mile. In many places, eighty acres is plenty of land to hunt deer on but as you get out into much more wide-open terrain, you typically need more land to hunt on as the deer roam so much more and the deer population densities are much lower. Wide-open fields of cropland are broken up with wood lots; tree rows or slough bottoms that provide cover and the deer that live in this environment have a much larger home range.

Because of the terrain to the east, scouting is often done over foot plots cleared in the woods or using trail cameras on pinch points. Trail cameras are an invaluable scouting tool but in some ways all a camera tells you is that the deer is alive and you might be able to figure out what direction the deer is coming from at what time. There are still a lot of clues missing when it comes to trying to kill a particular deer.

One painful lesson I have learned is that I can never assume anything with deer in regards to where they are bedding or the route they are taking from point a to point b. I guess wrong ninety percent of the time. Now I have gotten into the habit of using cameras to scout and finding a specific deer and I also use a camera to monitor a specific spot when I get ready to hunt but the information I can gather from scouting with optics is really how I can put a solid plan together.

When I was younger and more inexperienced, a common mistake I made was assume a bedding area or travel route just from the Intel gathered from trail cameras and unintentionally hunting with wrong or compromised winds. Now I am a lot more methodical and patient. I don't move in on a deer until I know enough details and I bide my time until the wind is right and I can get in without any detection. A gamble I sometimes struggle with is whether I can get out or get winded by deer after they pass my location so there are times when there are high risk high reward situations where you have one good chance to kill a particular deer but if you don't kill that deer that night, you compromise the spot. When I am in doubt, I sit on a hill and scout. There are many challenges to hunting this wide-open terrain but one advantage more hunters should capitalize on is to rely less on trail cameras and more on a spotting scope.

What is fascinating especially during the early half of the season is how much these bedding areas get influenced by bugs like gnats and mosquitoes. Much of the heavier cover is around water or is wet. An example would be a slough bottom or drainage. The cover can be really thick and look good but if the bugs are bad, deer will often bed up higher where the wind can blow through. Fascinating how deer have different personalities and preferences. Some specific bucks will prefer to bed in standing corn for example when it is really hot. Other bucks seem to be more sensitive when their antlers are in velvet and seem to stay away from anything that touches their antlers. These preferred bedding areas can change or shift through the season.

Food sources can also change but you really can't go wrong focusing on soybean fields if they are available at least until the leaves yellow. Small grains and crops that flower like canola can also get hit. Corn is sometimes used as a bedding area early in the season but what becomes really interesting is the travel routes deer choose. How deer move from point a to point b can be somewhat predictable in that they always take the path of least resistance and they like to feel hidden. Ravines or dips that hide deer in the terrain or edges that create easy walking are often the preferred route. 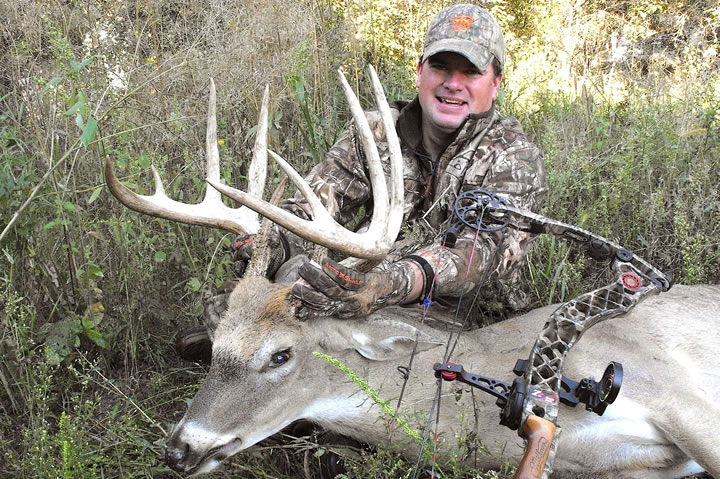 One thing I have found when checking trail cameras is that if I check the cameras too often and create a trail to my camera, I can actually disrupt the route I want the deer to travel because they begin to follow my route to the camera. This can create a few challenges when planning a fast and quiet route in and out of your stand or blind. If you make a trail, remember that deer will also begin to follow that trail. Because of the wide openness of this terrain, we do get our share of wind so the best thing I have found for getting into location is to go in during the middle of the day and use the wind to cover my noise and stay away from the easiest route. Picking through heavier cover or taller vegetation without breaking or beating down the vegetation to form a trail has been my most effective strategy.

The age-old challenge of harvesting a mature buck is catching a deer on its feet during daylight or shooting time. The further you are away from where a buck beds, the later the pics are going to be. When I first started bow hunting, I would get pictures of impressive bucks on camera at night and hope that if I hunted that location long enough I would get a chance during the day. Far shot and the more you hunt a spot the worst it gets. What also happened was that I would get daytime shots of a buck during the summer scouting and than as the summer progressed, the deer would become "nocturnal."

I don't believe that anymore. These deer that tease you in the summer and become nocturnal aren't changing their time line, they changed their bedding locations and one of the reasons deer often shift where they bed is human activity. If you want to make that deer go "nocturnal," check the trail camera often and make your presence known. The deer still moves before dark but now instead of bedding one hundred yards away, he is now three hundred yards away or a mile away. This is why the spotting scope is so invaluable when scouting.

Mature bucks are self aware enough to know and detect human intrusion so the key to killing a deer in my mind is to hide your presence. With that being said, disguise your presence with farming and ranching activity. The worst thing to do in my mind is to try sneaking in and out on foot. If you do, spray down and wear rubber boots. What works best however is a loud obvious vehicle. Don't try to hide or be sneaky if you have to mow a shooting lane or check a trail camera. Drive up if you can and drive out. The less your feet touch the ground the better. The reality is that there are people spraying crops all summer. There are people driving ATVs checking fence, there is a certain amount of human activity that deer get used to.

Remember that the landscape goes through changes. Don't over think the deer about clearing a shooting lane or trimming branches. Somebody could drive right by your stand with round bale hayer and deer will be walking by the bales the next day. Deer know what tractors are. If you try to sneak around too much, you smell different and offer an intrusion that the deer aren't used to. Become more obvious and use a vehicle whenever possible. With that being said, I like to drive as slowly and as quietly as possible in areas that are really secluded and I always like to do my work in regard to setting up blinds or checking cameras in the middle of the day. Wind or rain makes the intrusion even more hidden.

The biggest challenge of this open terrain is the lack of trees. I hunt out of a tree stand whenever I can because there are many advantages. Good field of view, great for watching around you so that if you are in the wrong spot, you gather additional Intel as you sit and watch. Good for blowing your scent away from the area. Movement is out of the line of sight. With that being said, good luck finding the right tree in the right spot. So often, I have to rely on ground blinds.

The versatility of ground blinds makes them a valuable tool for farm country whitetails. Don't worry about hiding it or trying to make it blend in, just put it exactly where it needs to be to kill a deer. The deer see it and after passing the smell test, they determine that it is just another bale or anhydrous tank. I often leave ground blinds out for long periods of time so for that reason I like to use the heavier duty Clam Elite Hunter Blind.

This terrain creates some challenges but also offers advantages. There are great deer available in these habitats and while whitetails will always offer ample doses of humility, these deer can also be figured out with the right strategies.