By Jason Mitchell - September 1, 2015
So many situations come late summer and fall where if walleye are present, they are going to show up on electronics. When walleye start stacking up on rock reefs, deep points and classic structure that is between fifteen and forty feet of water, you are going to see fish on the screen. Bare spots that are void of life are usually a waste of time. No arches, no clutter, no bumps on the bottom often means no activity.

A proven strategy for fishing classic walleye structure is to drive up and down over structure until you see fish on the screen. Keep driving and looking until you mark fish. What often gets lost however is just exactly what to look for. Eliminating dead water is relatively easy. Determining which marks are indeed walleye and exactly which locations to fish takes a little more intuition. 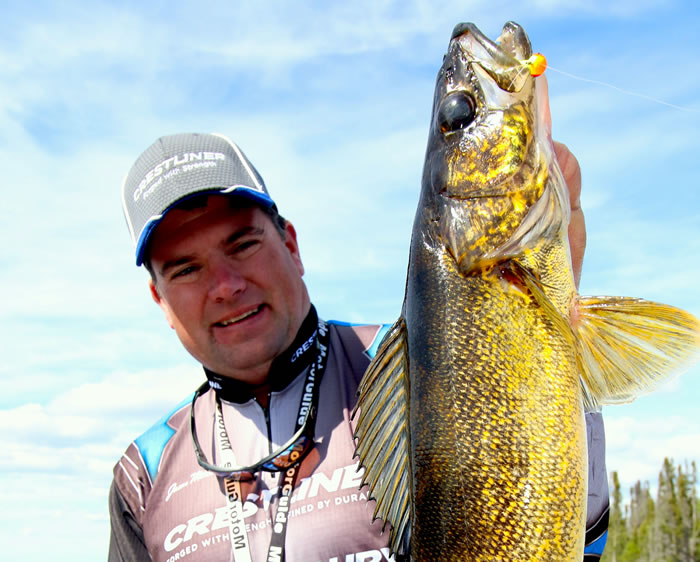 On many lakes and reservoirs, there is such a wide variety of biomass. The fish that show up on the screen could be catfish, suckers, tullibee, whitefish, drum or some other fish that isn't a walleye. I have beat my head against the wall wasting a lot of time trying to catch "perfect" marks that were not the intended species. What makes target identification even more subjective is that each body of water has it's own personality.

There are some lakes where if solid targets show up on certain locations a foot to three feet off the bottom, there is a high likelihood that those marks are walleye. The same screen on a different body of water however can completely fool you. Large white suckers in particular often lay across hard bottom breaks and often look just like walleye and you can spend a lot of time fishing for an unintended fish. The surest way to gauge and judge what is below you is simply time on the water on that particular fishery.

So often with walleye fishing, if it looks too good to be true… it usually is. Some anglers stop and fish where they see the most suspended fish on the screen or numerous stacked arches coming off a point only to realize later that the fish are whitefish or something else unintended. There are no hard fast rules with fishing and there has to be exceptions but usually, walleyes come across the screen one at a time. You might have five marks on the screen depending on how fast the boat is moving and how fast your scroll speed is set but walleyes often seem to set up in loose formations. Over deeper water, fish might sometimes overlap more but don't make the mistake of looking for too much because when you find too much, the targets below the boat are often not walleye from my own experience.

When picking apart structure, I can't tell you how many times I would mark a fish or two going a particular direction and than completely miss the same fish with my electronics when coming back along the same path but from the opposite direction. With a lot of rock reefs and deeper structure that has dips and crevices created by larger rock and boulders, there are blind spots in your electronics where fish get lost in the bottom if they don't get hit with the cone angle of the sonar so that they can separate from the bottom. So often, if you mark a handful of fish, there are often more that got missed. Fish that are really tight to the bottom in rocks can often look just like smaller rocks if there isn't enough separation. There are times when these really tight to the bottom fish will bite but often, the fish riding a foot to three feet off the bottom are the biters. Look for targets where there is good separation between the fish and the bottom and those are usually the fish that make you look good.

They key for catching walleye this time of year on so many lakes is to get into the rhythm where you know what depth range to search and also know what to look for. Remember as well that as we get later into the summer and fall, fish movements can tend to be more horizontal than vertical. What that means is structure that has a wider range of depth that say tops out in five feet of water often gets used less than a similar reef or hump that tops out at the depth fish are using.

If most of the fish are holding between twenty and thirty feet of water during this time of year, look for structure that tops out at that depth versus structure that comes up much higher and fishing the twenty to thirty feet of water available on that particular spot. This is a general rule of thumb that I believe plays the odds and here is why. Later in the year, when fish are holding at a particular depth, they are often simply sliding out over open water to eat and when they move, they don't move up or slide shallower but simply move out. Spots that top out at the right depth often hold more fish. Not to say that you won't find fish using the sides or the wall on much shallower structure because you will but usually there are fewer fish and they are not as concentrated.

With many deep structure fish, there are often windows where you catch seventy percent of your fish. When walleyes are gorging themselves on the swarms of tullibee, smelt, ciscoes or shiners that are often available in late summer, they often make you look bad because they are only active for short amounts of time. As a result, you can go back and forth over these fish fighting to get a bite and than for half an hour or so they open up. I have often felt that if I could get a fish an hour, I would hang in for the long haul as there is often some window where the fish open up for you. You might average a fish or so per hour for a five-hour window and than get an hour where you catch seven.

As a result, fishing this time of year is often very methodical and calculated. You have to trust your electronics and put yourself into position to be successful. Find the right fish and wait them out. Usually, when the marks start to lift off the bottom and separate, those are your active fish and that is your window to strike. This entire strategy however will unravel if you spend the entire day focusing on the wrong targets and the easiest way to get on the right track is get intuition into what to look for and learn to distinguish situations or marks on the screen that are a waste of time. Ignore the flat that has five solid feet of the water column filled with marks indicating fish because chances are, the marks on the screen are not walleyes.