Pete Maina On Triggering Muskie Strikes: I Like The SOUND Of That

By Dan Durbin - July 13, 2015
You might say the legendary muskie angler, Pete Maina, has been around the watery-block a time or two. Whether it's his former life of guiding hundreds of esox anglers a year, to currently writing books, appearing on television, and filling seminar halls- this long-haired boisterous angler not only knows how to catch em', he knows how to teach other to do it too.

But what more can be said about muskie fishing? Are there still strategies that have yet to been uncorked or have we exhausted the memory bank on new ways to get these dang things to bite?

Maina says that there will always be new lures and strategies and long as anglers and manufacturers continue to come up with new ideas. The last couple years, Maina has been experimenting a lot with sound and vibration, to get his muskies to go. 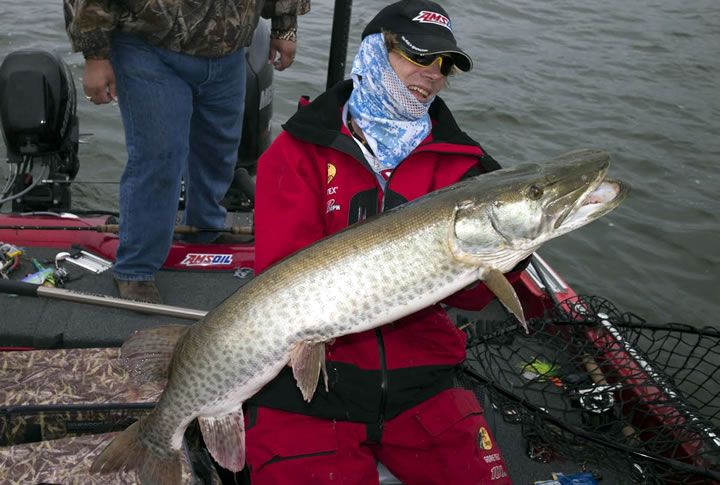 "Honestly I've known that sound and vibration can get muskies to react for a long, long time," he said. "It first sparked my attention when I'd get strikes on top water lures like the old Hog Wobbler or Topper Stopper. Sound was clearly a key triggering component when it came to fishing topwater."

Maina also points to the bass guys who have used Rattling Lipless Crankbaits like Rattle' Traps for decades.

"Heck, I just wish I would have figured it out more for muskies when I owned my own tackle manufacturing business," he said. "I could have made a lot of money."

Maina doesn't claim to have a massive focus group that has been analyzed by Harvard grads on "WHY" muskies sometimes react to sound; he just knows that they do.

"I began experimenting a couple years ago with using different style blades for bucktails- French, Colorado, Willow, Indiana, they all sound and run differently." he said.

"I wouldn't just vary the style, but the size too. Sometimes color. But more than the color I think it was distinct sounds that the combinations made that produced the difference."

One of his favorite combinations ended up being a #6 French Blade paired with a #8 Colorado Blade. He and his Dad Tex began using these new homemade lures and had some great success.

"We had several occasions where we were fishing and where at the BACK of the boat and simply caught more fish," Maina said. "This happened more than once. We could deduce that the different sound and vibration of the unique blade combination were getting reactions when the other baits weren't."

Word got out about of Maina's new interloping blades and he signed on with Hard and Soft Fishing to design them: Thus, Sound Science Blades were born and are just becoming available right now at several stores.

"I really do believe that these fish have a memory," he said. "We used to have a lot of success when the double #10 Colorados were paired on bucktails when they first came out. Everyone was throwing them and they were super hot; but as the fish got used to them they were significantly less excited to bite. I think that could happen with any bait. Eventually, if Sound Science Blade bucktails get used enough, they might have a fall-out in bites too. The trick is getting to these new concepts BEFORE the entire world is using them."

Maina also said that anglers need to take their baits that have seemed to lose their swagger and fish them in different ways.

"Maybe you have a certain spinner that has worked well in the past on a given body of water but it quit producing," he said. "How fast were you working it? We're you ripping it? If so, then try fishing it slower? Try fishing it in prop wash. What people don't realize is that it's not always the SPEED that gets you bit, it the sound of the bait, and when you adjust the speed you adjust the frequency of the sound."

Sounds like some hi-tech stuff but don't be intimidated by it. It can be as easy as changing the speed of your retrieve or picking up a new tail that sounds a bit different.

Dan Durbin
Dan Durbin is a syndicated outdoors writer who freelances for several local, regional, and national hunting and fishing publications. He is also co-owner of Bast-Durbin Advertising, a full-service ad agency the focuses solely on hunting and fishing-related businesses. He parks his boat and truck in
TRENDING DISCUSSIONS
Advertise here
Advertise here
Please take a moment to visit our sponsors. Without them we would not be here.