By Steve Huber - April 1, 2001
Hooray, even though Old Man Winter is still desperately hanging on here in northern Wisconsin, recently I saw signs that his grip was slipping. Even though people are still driving on local lakes, I was happily singing (all right, slightly off-key) along with the radio in my truck, the mighty ProCraft in tow. I was going fishing and I wasn't going to have to drill a single hole in ice. 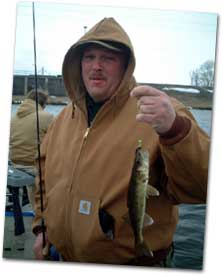 I'd checked the local landings on the Wisconsin River and found one open. That was enough for me, enough to get the boat out of storage, put fresh line on several reels and risk hypothermia. You see, I'm quite passionate about fishing, my wife says that I'm obsessed, I say that there's a slight difference in terminology.

Anyway, a short trip up-river found me in a river pool below a dam, fish showing on the Lowrance X-75 locator. These fish were holding in classic walleye structure, a hard bottom area at the bottom of a sharp drop-off. I eased the boat upstream and slipped the anchor over the side. There was little water moving through the dam so even though the water was 24 feet deep, I tied on a 1/16th oz. chartreuse jig, hooked on a 3" fathead minnow and cast out.

The water was only 39 degrees, so I knew that any walleye that was going to hit wasn't going to go for a fast moving jig. All fish's metabolisms are directly tied to water temperature and with the cold temps, they were going to be sluggish and slow at best, unable and unwilling to chase down a fast moving bait. Letting the jig fall to the bottom, I started the retrieve. Instead of aggressively jigging, I twitched the rod tip in little, 1 inch pops. Nothing hit the jig while doing this so I started to drag the jig across the bottom. After a foot of this, I paused the lure, then started the same thing all over again. Pop, pop, pop, draaaaagggg, hold. One the second cast, it was during this pause that I felt that wonderful, familiar feeling of a walleye holding the minnow. I dropped the rod tip back to the fish and allowed it to tighten up the line. As soon as I felt the fish again, I set the hook into the first open water fish of the year. Good Lord, that FELT GOOD!

After that fish (a smaller male walleye), I thought that possibly they wanted the minnow lying still on the bottom and brought another rod out of the rod locker. I set up a rod holder, tied on a Lindy Rig, lip hooked a minnow and dropped it to the bottom. I then picked up my jig rod and began again. Casting out, I set up the same cadence with the jig. A couple casts later, I felt another walleye pick up. So maybe they didn't want a stationary bait. But, after trying a couple dragging retrieves with no success, I tried a couple jigging. Still, no luck. I then went back to the original 3 move retrieve, I was getting back into walleyes. What did I learn from this (and you too) is that if you listen carefully, the fish will tell you what they want. 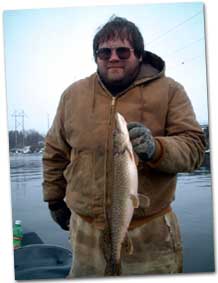 I ended up that day catching 25 walleyes and 8 northern pike in roughly 4 hours. I could have limited out, had I taken the time to dig my landing net out of a compartment but hey, on the first trip of the season, I'm entitled be a little rusty. Besides, I rarely keep walleyes anyway.

Two days later, I was guiding two really nice guys, Dave and Wayne, new clients for G & S Guide Service. After picking them up at the hotel in Rhinelander, they informed me that they had never jigged for walleyes. Man, I was worried. Jigging for walleyes is never an easy skill to teach and jigging for cold water 'eyes is even tougher. You see, not everyone wants to put the effort into jigging for these finicky creatures that it sometimes takes. Besides, the weather conditions on this particular day were really "not nice".

We got some fresh fathead minnows and put the boat in on the river. The day was cold, gray and dreary, perfect for walleye fishing, not terribly great for being out and about in a boat. We got to the pool and there were other intrepid souls out there as well. Some were catching fish, others weren't, typical of spring walleye fishing.

I was explaining the feel of spring walleyes. Sometimes an aggressive assault on the minnow, other times, a slight tap, many times, just heaviness or "something doesn't feel right", when Dave set the hook. I immediately felt better, between his feel and my descriptions, Dave figured it out in record time.

Not too long after that, Wayne set the hook as well, only when his fish came to the surface, it didn't have glassy eyes but a long snout and a mouth full of teeth. Dave landed his first northern pike, only one of many for the "Pike King" that day.

The tackle that we used on this day was very simple. 6 foot spinning rods, Shimano Sahara 1000 spinning reels, Berkeley FireLine 4/10 and 1/16th oz. leadhead jigs. Tactics were as described above, simple jigging in deep water. On this day, the walleyes started out the day wanted my "Triple Threat Retrieve" but as the clouds closed in and the rain began to fall, they switched to wanting the jig just dragged on the bottom. Then, just before dark, as the rain turned to snow, they just plain shut off, like someone flipped a switch, something that walleyes excel at. But, we probably caught 60 walleyes, Wayne caught what seemed like an equal number of northern pike, we were cold, wet, hungry and tired, but man, did we have fun!

So if the thought of spring yard work, cleaning the garage and other household chores seem to be too much to bear, here's what I suggest. Get out the boat, dust off the fishing tackle and go find an open river. The walleyes are calling, are you listening?

If you go, dress warm, wear a life jacket and have fun.