By Bill Schultz - May 1, 2001
In my article, "Smallmouths by Foot", I talked extensively about the Rebel Teeny Wee-Crawfish. What I didn't tell you was that I originally purchased this little crankbait to fish for bluegills in a pond I have access to. To this day, I remember my first cast with this little fish magnet. I caught two bluegills and knew I had a winner. Since that day in 1992, even though I've fished it more for smallmouth bass, I've caught many bluegills and other panfish with a number of additional doubles.

EQUIPMENT AND TACKLE
You already know the lure I use most often, but there are a number of others I've tried and had good luck with. These include Rebel's Crickhopper, Teeny-Wee Frog, Hellgrammite, Cat'r Crawler and Tadfly, along with the smallest Bomber Fat "A". For your rod, a good light or ultra-light is essential to assist in casting these light 1/16 to 1/8ounce lures. Also, the lighter the action of the rod, the more fun you will have playing the fish. I use 5'6" to 6'6" light and ultra-light St. Croix rods. 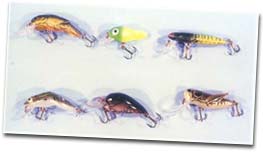 Important in casting the lure and offering the right presentation is a quality line. I prefer 4 lb. Silver Thread Excalibur because of its castability, abrasion resistance and the strength to hold the largest bluegills and even bass, which will compete with the panfish for these lures. I'm up to 16 different species on the Teeny Wee-Crawfish, including a 5.5 pound largemouth and a 6 pound brown trout. Along with the right line, a good reel with a long cast spool will make the job of casting these little lures much easier. I like the Shimano 1000 series reels.

The last piece of equipment I don't fish without is a good pair of polarized sunglasses. In clearer water they assist in locating structure and fish. It also adds to the excitement to see the fish hit the lure. The best I've found are the H30 Polarized Sunglass System. They look great, are comfortable, and you get three interchangeable lenses for bright, cloudy, and low light conditions. 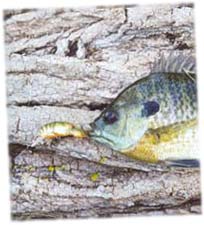 TECHNIQUE
The very first cast with the Teeny Wee-Crawfish, when I caught the two bluegills, I simply made my cast, reeled the lure in with a steady, medium retrieve, and they both hit. This continues to be a good technique, especially if the fish are active. In Door County, I catch perch using this technique for smallmouth bass. The perch seem to love to chase the lure. If you need to get the lure down deeper you can either use the Deep Teeny Wee-Crawfish, which dives a couple of feet deeper with its long lip or put a small split shot on the line above the lure.

Another great technique for bluegills is to cast the Crickhopper, Teeny Wee-Crawfish or one of the other lures I've mentioned, let the ripples die down, then twitch it a number of times. The small profile gives the appearance of a struggling grasshopper or some other creature. Often this is when a bluegill will hit it. When the fish aren't as active, they will hover just below the lure and look at it. It's almost like they're saying, "Ok who's going to take the first shot a this thing?" In this scenario, which I've seen a hundred times, they nip at the end and get caught on the back treble. When they're active they come up on the lure much faster and many times get caught not only in the lip area, but also on the top or side of the head. These lures float, so another good technique is to jerk the lure and then let it sit. I've had many situations where the bluegill or other panfish will hit it as it slowly floats to the surface. 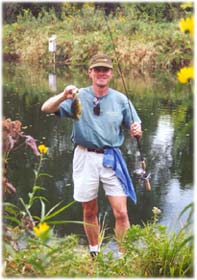 ON THE WATER: WHAT TO LOOK FOR AND WHICH TECHNIQUE
Fishing these small crankbaits for bluegills can be done on lakes, ponds and rivers. From a boat, when casting to shore, fishing shallow water near deep dropoffs or over grass, I will use all the techniques I've discussed. Near cover like logs, rocks or brush, I really like using the twitch technique or giving the lure the quick jerk and letting it float back to the surface. Fishing a pocket in the weeds is tougher, but can be productive. In this situation I use the twitch or quick jerk technique.

In the pond setting, you will most likely be fishing from shore. I recommend casting to your right or left and trying to keep the lure somewhat parallel to shore. If the pond is small, you can cast from one side to the other and work the shallows, almost as if you are in a boat. Like the lake situation, the cover and structure will dictate the technique you use.

It's fun catching bluegills and other panfish anytime, but without a doubt, cranking for them is my favorite. These little lures that I've discussed are going to catch you a lot of fish almost anywhere.